After an array of short film releases under the Dubai based Zen Film Productions (ZFP)  banner this year, Zenofar Fathima, filmmaker and CEO of ZFP is now prepared to shoot and launch her first feature film, titled Specter. 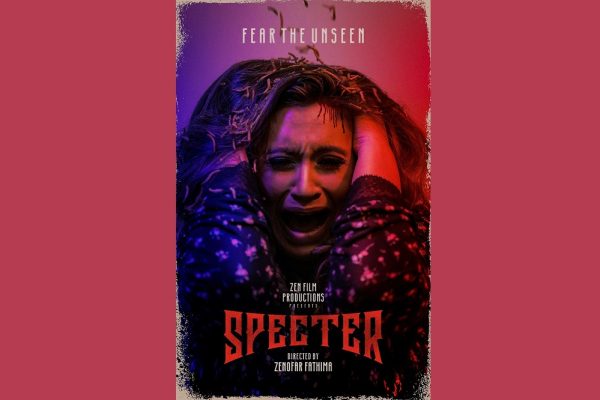 The film is the ZFP’s next cinematic release, after a string of COVID-19 centric short film projects such as Tomorrow Never Came, The Wave, and Hope. The film’s first look was exclusively revealed on Zee Cinema Middle East in mid July 2020, and tells the tale of a struggling celebrity attempting to not only battle her own demons, but also an elusive, and seemingly paranormal presence.
Not only does Zenofar stress on Specter encompassing a unique plot and an intriguing set of characters, but she also stresses on the idea of Specter acting as a medium to propagate yet another social awareness message, a rare feat with most horror films which primarily emphasize on the shock and gore elements of the film. “In whatever film I direct or conceptualize, I always ensure that it not only keeps audiences on the edge of their seat, but that it also conveys an important message to society. Specter is no different. I think Specter will get the public thinking about a specific societal issue that needs start being taken seriously,” says Zenofar.

While the protagonist is being played by Zenofar Fathima herself,  the film will also feature local talents who will complement Zenofar’s character as well as the overall sotryline. More details will be released in due course.
The film is slated to release on an exclusive to be announced OTT platform, where it can be watched by the general public.

For more information on Specter and Zenofar’s other projects, check her out on Instagram and Facebook (@zenofar_fathima).